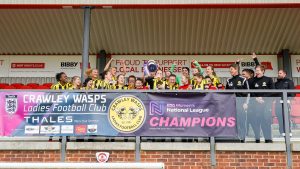 Founded in 1991, Crawley Wasps have been instrumental in the successful development of girls’ football in the Crawley area. From the early days of playing seven-a-side in various Surrey leagues, the club have expanded to more than 100 playing members in teams at all levels from Under-11s to three Ladies sides.

Wasps have helped pioneer the development of ladies and girls’ football in Sussex by becoming a founding member of the Sussex County Women and Girls’ Football League in 2002-03.

Between May 2013 and May 2018, as they progressed from Under-11s to Under-16s, one Wasps team lost just three of 70 matches against girls teams – their dominance was such that they tested themselves in a boys’ league in 2016-17.

In the 2015-16 season, three of the club’s teams – the Ladies’ first team, Ladies reserves and that all-conquering Under-14s – reached their respective County Cup finals.

The club celebrated its 25th anniversary season, in 2016-17, in style both on and off the pitch. Thales, one of Crawley’s largest employers, became Wasps’ first-ever main club sponsor, while the Ladies’ first team again reached the Sussex Cup final and also the League Cup final.